Fell running, sometimes known as hill running, but not to be confused with mountain running, is the sport of running and racing, off road, over upland country where the gradient climbed is a significant component of the difficulty.

Since moving to the edge of the West Pennine Moors last autumn, fell racing has been on my radar, but I’ve always perceived it as a bit beyond my capabilities. I’ve marvelled at plenty of videos of fell runners hurtling down mountains, and thought – I could never do that. But since moving to an area with a huge fell running history, I’ve been out on the hills a couple of times a week, getting stronger and more comfortable on the terrain. Moving from the flats of west Lincolnshire, the hills came as a huge shock to my legs and my lungs. I felt like a brand new runner for a month or so, struggling up hills a mile long, sometimes longer, feeling gravity pulling me backwards. But gradually, every day, I’ve been getting stronger, and this week I had an epiphany – I LOVE hills! 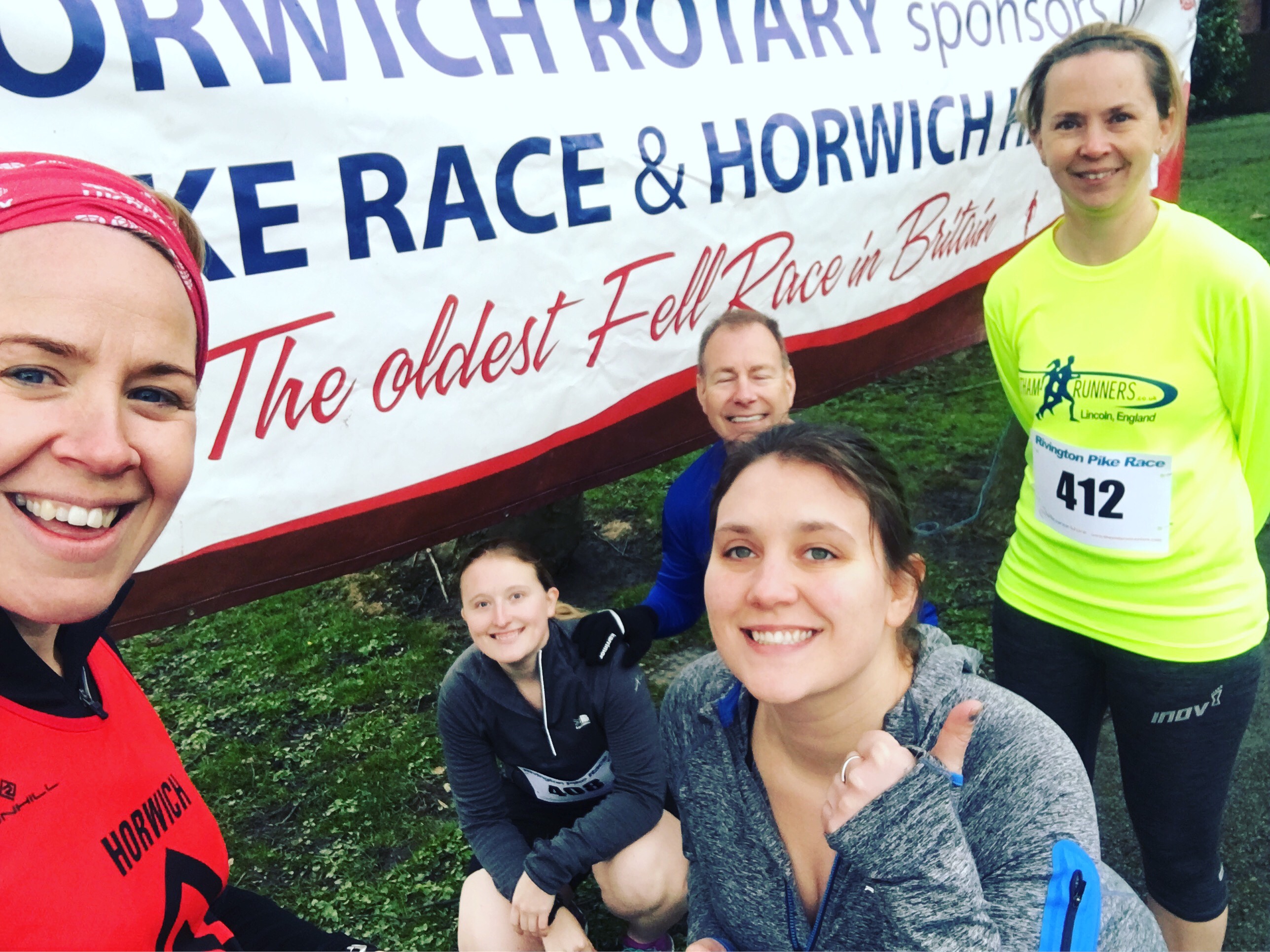 When I heard my new running club was hosting its annual fell race on Easter Saturday, which is billed as The Oldest Fell Race in Britain, it was a no brainer to walk the mile or so from home to the start, to join in the fun, and try my first official fell race on terrain that I was now comfortable and familiar with. I even managed to convince the four friends that were visiting from Lincoln to come and join me for what was also their first fell race.

Approximately 450 runners lined up at the start of the Rivington Pike race, ready to run the mile and a half up to the Pike, and back down again. Friends who had done the race before had described it as a “belter” and a “cracker” of a race, so I was excited!

Our £5 paid, our numbers pinned onto our club vests, we set off up Lever Park Avenue, before turning right off the road and heading straight up a track, which became steeper and muddier. The mood was cheerful; spectators were cheering, and runners were smiling and laughing. As we hit the hill, silence fell as runners focused on their breathing. Many started to walk, but I was determined to keep pushing on. I managed to run until we hit the steep grassy section and front runners began to head back down! The lead runners are extremely fast, but looking behind me, I certainly wasn’t the last, and I was impressed at the wide range of abilities this race had attracted. At the top of the steep section, my calves burning, I paused briefly to look behind me and catch my breath. The view was incredible. We still had another steep rocky section to head up to the top, so I dug in and enjoyed the cheering from the spectators at the Pike, one of who told me to stop and enjoy the view! It’s a view I’ve seen many times thankfully, so I started my descent. The grassy, muddy descent was slightly terrifying and a lot of people overtook me on this part. I made a mental note to do more downhill practise. Once I got off the grass however, I opened up my stride and powered down to the finish with a huge smile on my face, a little sad that the race was over so quickly!

I really enjoyed my first experience of fell racing, and my friends did too. I admit I was apprehensive to try one because I thought I would be last, but the results from this particular 3 mile race ranged from 17 to 54 minutes, so all abilities truly are welcomed. I’ll definitely be doing more fell racing in future, they are great value, really friendly, and terrifically satisfying knowing you’ve powered up some big climbs.

I’ve also got plenty of technique to work on and things I’d like to improve!