A windy one! Rockingham 10k

I was invited to take part in the Rockingham 10 as part of team UKRunChat, and I jumped at the chance to do what I was anticipating would be a fast 10k for what would be my PB race of the season. I’m generally a trail runner and don’t do many races, so I wasnt really expecting much scenery from Rockingham, I was just looking forward to a fast, flat course which I knew was two laps so would be relatively easy to pace.

The race organisers had negotiated a discount in a local Best Western hotel in Corby, which was comfortable and a 5 minute drive from the race start. Rockingham Race Circuit is also surprisingly accessible, with the A1 only 20 minutes away and a train station in Corby.

When I arrived at the race circuit, my first impression was one of excitement at the chance to run around a totally unique course. My second impression was how windy it was (!!) and after weeks of shouting about how I was going to finally go sub 50 minutes at Twitter I resigned myself that to the fact that I would be happy with a PB. I chatted race strategy with Josh, who had offered to pace me, and we initially agreed progressively faster splits – but more on that later!

Race HQ was in a large garage with heaters, and chairs and tables, and collecting my number took seconds, so after a bit of mingling and meeting some of the UKRunChat community, we were ready to start. The race briefing took place inside the garage, then we were led to the start area where we had a wait of approx 5 minutes, which gave me chance to do a few strides and get my heart rate back up after my warm up. Then we were off!

I quickly settled into a 7:50 min/mile pace as we passed the initial turn point to head around the circuit in an anti clockwise direction. As we turned the first bend, it became clear that the headwind would be a tough opponent, so we revised our strategy to make the most of the tailwind, where I run comfortably hard at 7:15 min/mile pace. The last straight at the 4K mark as we headed back to the pits for the end of the first lap was tough in the wind, and slowed me down to almost 9 mins/mile  I passed the 5k mark in 25:30 so knew I wouldn’t be going sub 50 but dug deep instead for a PB, which I achieved in a time of 50:55. (Thanks for your help Josh!) Sadly the wind won the race this time but I’d love to go back in non windy conditions and have another crack at that sub 50.

I wasn’t expecting the course to be interesting, but its twists and turns and slight inclines made it more exciting and I really enjoyed running around it. There were several water stations around the course that I didn’t really need on the 10k, but I’m sure the 10 milers appreciated them.

The medal is really unique, and the goody bag contained a bottle of water, a banana and a packet of crisps. T-shirts cost £10 extra in advance (or £15 on the day). There were sports masseurs available for a donation, which I didn’t make use of

Best of all, results were available immediately via an instant printout from the computer.

All in all a slick, well organised race that I would recommend if you’re seeking a PB. Thank you for having us, Rockingham 10 and SBR Events! 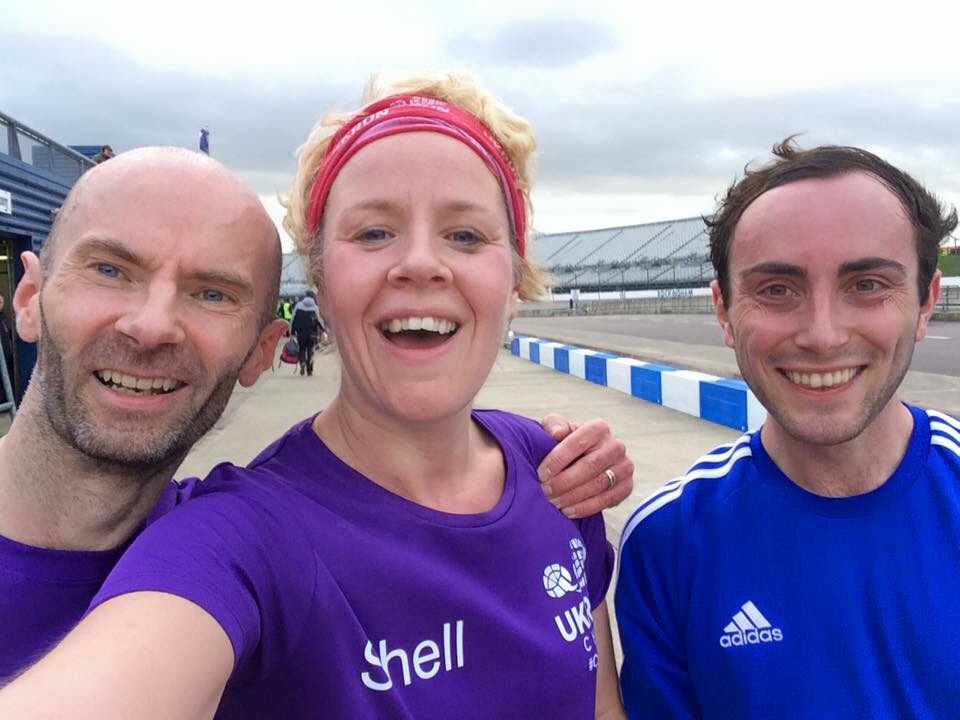